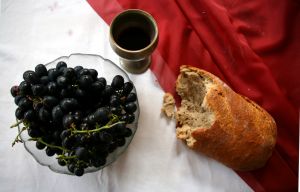 How do you remember something? Do you tie a string around your finger? Make a note? Write it on your bathroom mirror or say it out loud to yourself over and over?

Just moments ago I folded up an eight-page letter that my grandparents wrote to me almost 25 years ago. I found it when I was going through my parents’ basement. I was helping them prepare to move, so we opened dozens of boxes that had been tucked away for years. As we opened each box and unwrapped the contents, it felt like Christmas discovering old toys, out-grown dresses and dusty photo albums. I was a little sad as we separated out many things to give away, but it was also a precious time of reliving special memories.

Just like my grandparents’ letter helps me to remember them, and just like the boxes in my parents’ basement bring special memories to mind, these two meals were given by God to help us remember.

The Israelites had been slaves in Egypt for almost 400 years. After a series of plagues designed to force Pharaoh to free His people, God sent one final punishment. In order to separate out His people, to mark them and keep them safe as those who believed in the One True God, the Israelites killed a lamb and painted their door frames with its blood. Then, they ate their final meal in Egypt quietly inside their homes. That meal consisted of the lamb, unleavened bread and bitter herbs. That final meal became a feast that the Israelites celebrated every year called The Passover.

Exodus 12:25b-27 says, “When you enter the land the LORD has promised to give you, you will continue to observe [Passover]. Then your children will ask, ‘What does this ceremony mean?’ And you will reply, ‘It is the Passover sacrifice to the LORD, for he passed over the houses of the Israelites in Egypt. And though he struck the Egyptians, he spared our families.’”

Centuries later, in a quiet, upstairs room, Jesus and his disciples sat down to eat the Passover meal together and remember how God freed the Israelites. But, as Jesus broke the bread and poured the wine, He told the disciples something new:

“…and when he had given thanks, he broke it and said, ‘This is my body, which is for you; do this in remembrance of me.’ In the same way, after supper he took the cup, saying, ‘This cup is the new covenant in my blood; do this, whenever you drink it, in remembrance of me.’”
(1 Corinthians 11:24-25)

Jesus still wanted the Passover to help them remember, but now He wanted them, and us, to remember something different. When Jesus died on the cross for our sins, He became our Passover Lamb. Because He died, God now “passes over” us; He forgives us and we don’t have to pay for our sins. Those who do not believe in Jesus, just like the Egyptians did not believe in The One True God, will not be passed over and they will face punishment for their sins.

This Easter, when you sit down to a special meal, stop for just a minute. Bow your head and remember what Jesus did for you, for me and for everyone who believes in Him.

2 thoughts on “Easter is for Remembering”