I mentioned that I made a second discovery the first time I read the preface to C.S. Lewis’ book, The Great Divorce. Don’t worry, this observation is much shorter than the last one.

Most of you know that I have an eating disordered background. I don’t know if that’s the proper way to say it, but I think it makes sense. I dealt with anorexia for, at this point, more than half of my life.

One factor that frequently contributes to body dysmorphia,* is the idea that there is a perfect physical standard. All forms of media pummel our brains with visual and audial messages about an ideal body shape. Women, particularly are susceptible to these bogus rants.

Perhaps C.S. Lewis wasn’t thinking of the size of his thighs when he wrote the book, but I certainly see a reasonable application for a few of his comments.

“Even on the biological level life is not like a river but like a tree. It does not move towards unity but away from it and the creatures grow further apart as they increase in perfection. Good, as it ripens, becomes continually more different not only from evil but from other good.”

Imagine if we applied that to our bodies!
What if it’s true?
What if, the more distinct we are the better?
What if the most radical aspects of our beauty are those which define us from everyone else?
What if the most outstanding characteristics of our physical beings are those which no one else has?
What if our most celebrated potential is that our individuality can inspire, challenge and enhance the differences of others?

Think of it…why do we admire a blue jay? Is it not for the crisp azure of his feathers, starkly rimmed in black and white? Like God forgot to remove the tape after painting the edges of his feathers.

I appreciate a quail’s cry simply because I recognize it and he sounds like a familiar friend. I don’t wish the cardinal was the color of the sea, and I don’t wish the quail said, “Sue Smith,” instead of, “Bob White.” Their perfection is in their distinction.

Think even of a season’s grape harvest, pressed into a magnificent vintage. What makes a wine favorable? Is it not because one year’s drought deepened the flavor and another climate’s cool soil heightened the acidity?

So what if we applied Lewis’ concept to our own bodies, if as God’s creatures we believed that the farther apart we grow we increase in perfection.

“Good, as it ripens, becomes continually more different not only from evil but from other good.”

*Body dysmorphic disorder is a type of mental illness, a somatoform disorder, wherein the affected person is concerned with body image, manifested as excessive concern about and preoccupation with a perceived defect of their physical features. Wikipedia

Resource for thought: Health at Every Size

Two Peas In a Pod

is a WONDERFUL website with a wealth of delightful recipes, tips and ideas. I think my favorite thing is their pictures – full of life and the brimming bounty that life is meant to be. I can almost vicariously catch their joy, as husband and wife team up to duel with kitchen catastrophes and win nearly every time.

That said, I will post a picture of my failure or success with this recipe, after I made my slight deviations to “health-ify” the dessert. My criteria for healthy are fairly subjective and strictly based on my own preferences. I like big portions, I want to be able to enjoy quite nearly 1/4-1/6 of a dessert. Therefore, the calorie count can’t be terrifying! The recipe can’t be so saturated with carbs and sugar that I feel guilty enjoying it as a bedtime snack. I prefer for my desserts to have a descent amount of protein, in this case, the recipe falls short unless you top it with a dollop of your homemade Greek yogurt.

So, wrap up National Blueberry Month with a BIG serving! If you make this recipe using my alterations, you can have 1/6 of the recipe for 218 calories!

(you can see the original recipe here, or click the picture above)

Fresh blueberries and peaches are covered with a sweet crumble topping and baked to perfection! This dessert screams summer!

For the crumble topping:

3. For the crumble topping: in a large bowl, combine the flour, oatmeal, brown sugar, granulated sugar, salt, and cinnamon. Stir together with a whisk. Mix in the butter with your fingers until the mixture comes together and you have big crumbles.

4. Place the fruit mixture in a 2 quart ceramic or glass baking dish. Sprinkle the crumble mixture evenly over the fruit. Place the pan on a baking sheet pan lined with a Silpat or parchment paper and bake for 40 to 45 minutes, or until the tops are browned and crisp and the juices are bubbly. Serve warm or at room temperature. 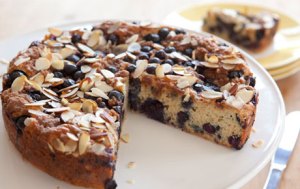 Method
Preheat oven to 350°F. Grease a 9-inch round cake pan with cooking spray; set aside. Put 2 tablespoons of the whole wheat pastry flour, sugar, butter, cinnamon and cardamom in a medium bowl and mix together with a fork or your fingers until well combined and mixture is in large clumps; set streusel aside.

Put remaining 1 cup whole wheat pastry flour, all-purpose flour, sugar, baking powder, baking soda and salt in a large bowl and stir to combine; set aside. In a medium bowl, whisk together yogurt, vanilla and eggs then pour into bowl with dry ingredients and stir until combined. Gently fold in 1 cup of the blueberries.

Spoon batter into prepared pan and sprinkle reserved streusel over the top. Scatter remaining 1 cup blueberries over the streusel then top with almonds and bake until a toothpick inserted in the center cake comes out clean, 30 to 40 minutes. Once cooled, loosen edges of cake and transfer to a plate. Cut into slices and serve.

Well, those are the “rules” but let me tell you MY way! Drop the calories to less that 200 per 1/4 of the recipe, add some healthy fiber and drop quite a bit of fat!

I replaced the whole wheat pastry flour with instant oatmeal (in both places where it is used). I used Splenda in place of the white sugar, but for the streusel, I did use real brown sugar. I used egg whites instead of whole eggs and “light” blueberry yogurt. Also, I used Brummel and Brown yogurt-butter instead of traditional butter. Finally, the nuts are an excellent source of healthy fats, so feel free to use them. I didn’t use them in my first try with this recipe, but I’m sure they’re awesome!

Here’s what I came up with:

Ask almost any fitness professional and they will tell you that no matter how much you workout out, if your nutrition stinks, you will never reach your goals. I once had a boyfriend in high school as me, “How in the world do you eat so much?”

Now, if anyone asked me that, my answer would probably be, “Because most of what I eat is green.” But back then I said, “I workout so that I can eat whatever I want.” It’s true, for a few dreamy years you can eat nearly anything you want. Your waist may not show it, but your heart will.

In fact, this weekend, my husband and I came across an article that proves my point. An average size girl who ate nothing but chicken nuggets for 15 years, collapsed due to malnutrition. She wasn’t fat, she didn’t really over eat, I don’t know how much exercise she did. However, your body craves the nutrients that your Creator prescribed in the first place.

I love to experiment in the kitchen. A few of my favorite resources are Eating Well and Clean Eating. Usually, I start with something they suggest and modify it until I have something only remotely similar.

Kale is my new favorite find. I don’t know how many times I passed it in the grocery store, not knowing exactly what it was or what to do with it. Now, I have two giant bags of it in my fridge and Patrick keeps finding it in everything (:

Try this one, courtesy of the 21-Day Kickstart Vegan, a fantastic App available for the IPhone.

Combine beans and broth and garlic in a large saucepan. Place chopped kale on top of beans and bring to a boil. Cover, reduce heat to low and simmer until kale is tender, about 15 or 20 minutes. Remove from heat and stir in olive oil, salt and pepper and Tabasco to taste. I topped my serving with feta cheese.

I think I served this to Patrick once and then decided to eat all the leftovers myself. It is delicious!

The first version of these cookies was called “Fool Yourself Cookies.” I don’t remember how I found the recipe but I’m really glad I did. I am even happier that I never settle for good enough, first try, or suggested methods. You have to try MY cookies. Just in case Fool Yourself is trademarked (it’s not) I altered the name for my cookies, as in: You’ve Got to be Kidding, These are Healthy?

Mix all ingredients. Space evenly on greased cookie sheet – 9 spoonfuls will equal 60 calories per cookie. Bake at 300 degrees for 10 minutes. These are divine, but I highly recommend making your alteration. You can’t go wrong. Try Tbs. of PB2 instead of cocoa. Use a full banana instead of prunes or use applesauce or pumpkin or…

Be sure to share your changes here in the comments section. I might want to try your ideas!